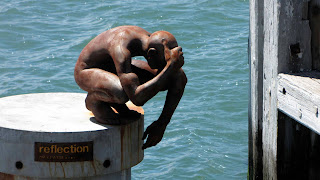 January is a time to look back and look forward. I am not sure what this statue on the Waterfront in Wellington is reflecting on or why his hand is over his head. I have a number of half finished reflections from the last few months. I hope to share some of them in the weeks ahead. Overall 2009 was a very good year and I am still working through some of the lessons from the experiences of some of what we were able to be involved in. 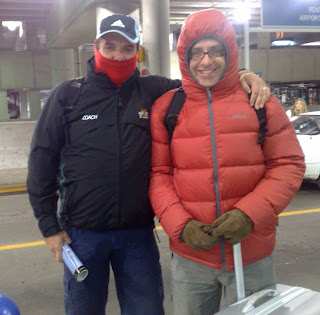 The New year started with Andy and I in St Louis for the Urbana Missions Convention which happens every three years. We now have a US charity established and will be seeking to grow both support and work into the Pacific from that side of the Ocean. I led a seminar on work in the Pacific with my friend Yando from PNG. We were encouraged at some new relationships and see some real potential in networking and mentoring some younger leaders in North America. . It was great seeing Andy back to his fully functioning self a full 20 months after his bike accident. Ailsa and the boys saw in the new decade in warmer weather at the Tennents 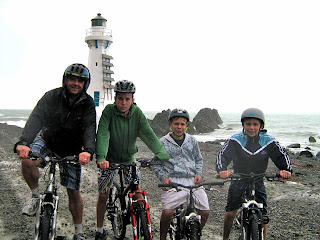 We tend to take photographs on sunny days which gives a slightly misleading picture of the weather. The summer over all has not been the best and this day cycling to the lighthouse from Eastbourne in the rain is perhaps more typical of many of the days that we have had this year. 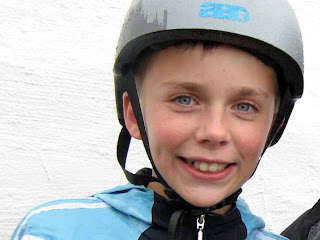 Good times are not conditional on good weather and we have some happy memories of days which did not quite work out as planned. 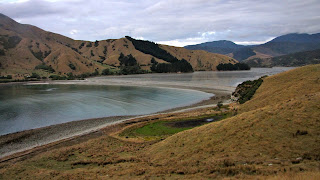 We spent a couple of nights camping at Cable Bay. This was where the NZ terminus of the first telegraph cable to Australia was opened in 1876. This reduced communication with the UK to 4 days instead of the 6 months it took by letter at that time. It is hard in this age of instant messaging to think of 4 days being a revolution. A ten word telegram cost around the equivalent of $30 to send. This does make even roaming SMS seem comparatively inexpensive. 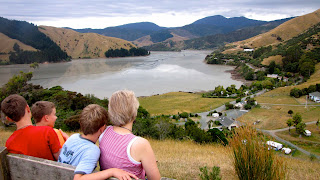 You can just spot our car and tent to the right of Ailsa's shoulder. We had a good few days despite the showers. Highlights were climbing up the hill behind the campsite and a half day sea kayaking round Peppin Island. 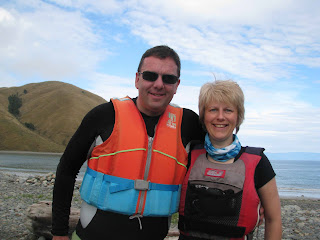 We went in double kayaks with a guide and another family. Craig surveyed the options and quickly worked out that the guide was the best adult to be paired with! 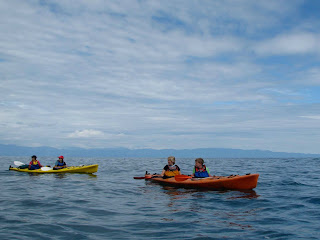 We canoed through the waves and in between small islands and outcrops of rock. Stopped at a small beach to swim and snorkel and came back through a cave. The round trip was 7 km and it was great wee adventure. 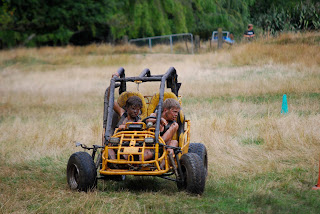 The Annual Staff and Families Conference took place at Bride Valley near Nelson. Mary Fisher from Australia spoke from Genesis on the Hospitality of God and the Shalom of God helpfully pointing out how counter cultural Genesis was and how different it is from other Creation narratives. Paul and Megan Winch led us in some workshops thinking about family dynamics and relationships. We also had plenty time for young and old to enjoy clean and dirty activities on site. 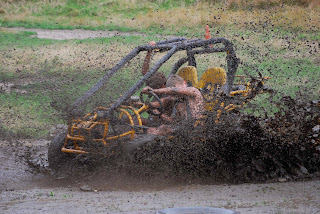 Staff and families is a fun conference and embodies many of the community values that we are seeking to develop. I think it is starting to become one of the highlights of the year. 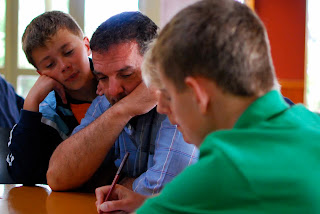 It was good seeing the older children participating in the all age learning times. Ailsa is in this picture if you look carefully!
My most memorable sound bites from the conference were:
“I had met Christians before but never one that had spoken about Jesus” Jodie Bates reflecting on what struck her as different about meeting Kristopher while working as an actress.
“Giftedness and Godliness are not the same thing” Mary Fisher reflecting on her own spiritual journey.
“The kingdom of God is about winning over not taking over” Paul Winch reflecting on keeping going in Ministry and being fruitful. 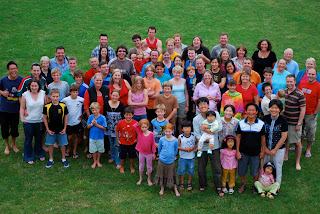 It was hugely encouraging to see the growth in the staff team. In 2004 there were 17 at the Staff and Families Conference, this year there were 73. There was also a very happy atmosphere. It was great to see the kids getting on so well together and there to be a genuine commitment to partnership on campus. We still have some team issues but things have progressed a great deal in the last four years. 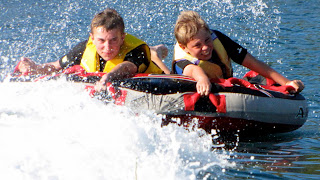 After the conference we went to Keith and Raewyns's Bach in the Sounds. This is a fantastic holiday house right on the water and only accessible by boat. We had a great time and we all renewed our acquaintance with the Biscuit. In most of the photographs Luke is looking determined and Jamie is laughing! 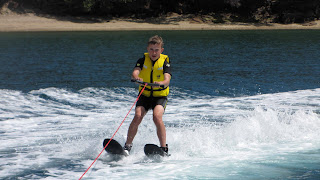 Luke managed to get up on the Waterski on his first attempt and really enjoyed it. Jamie was still a bit light for the ski but did get going successfully on the wake board. 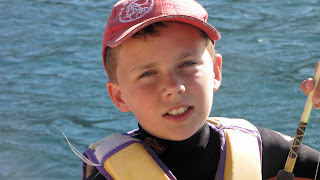 The boys did a little fishing from the boat and from the dock. The fish turned out to be mostly smarter than us but fishing is quite relaxing when you are watching other people not catching anything, at least until the lines start getting tangled. 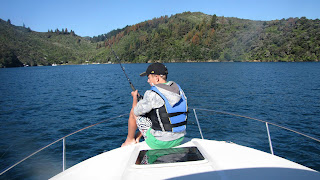 Luke did catch a rather ugly fish with a horn from the boat and a few tiddlers from the dock. 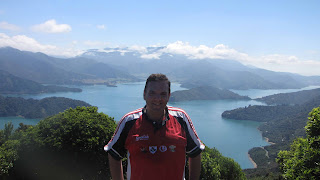 I always like getting to a high place to see how things connect up and to get a proper appreciation of where I am. On the last morning I walked up part of the Queen Charlotte Track and then on a side loop to the top of a small hill. It was a pretty steep climb but well worth the effort. 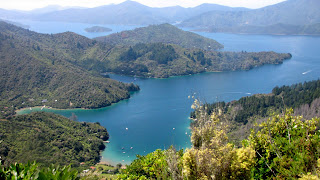 The views over the Marlborough Sounds were fantastic in all directions. It is a real priviledge to be surrounded by so much awesome scenery. Much as we enjoy it I don't think people here fully appreciate it. 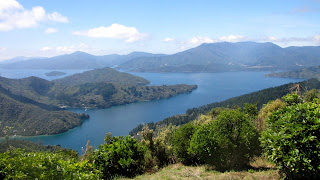 "But the basic reality of God is plain enough. Open your eyes and there it is! By taking a long and thoughtful look at what God has created, people have always been able to see what their eyes as such can't see: eternal power, for instance, and the mystery of his divine being. So nobody has a good excuse." Romans 1 in the Message 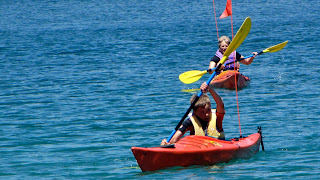 While I was up the hill Ailsa and Craig kayaked over to Mistletoe Bay while the others came to pick me up in the boat. Luke and Jamie swapped into the kayaks for the return journey. Craig particularly likes being in a canoe. 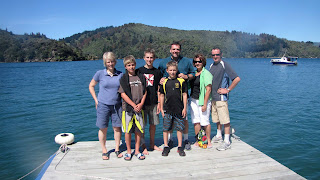 The hospitality of people like Keith and Raewyn has been hugely appreciated by our family. We are often conscious in the holidays of being far from family and friends in Scotland and having special times with special people means even more. The last photo we had with Keith and Raewyn in the Sounds was when the Marshall's were visiting 2 years ago. The boys have a lot of happy memories on and off the water from both times in the Sounds. 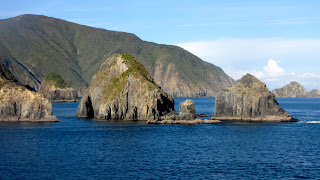 The ferry journey between the South and North Island is one of the great ferry crossings in the world. The first hour from Picton goes through the Queen Charlotte Sound, before going through Heads and out into the Cook Strait. We have had great weather on most of our crossings and this trip was no exception. 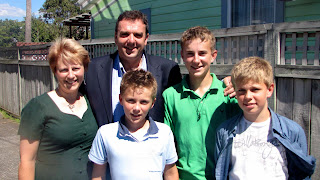 Yesterday we celebrated Nicola and Stu's wedding. Nicola has been doing a great job with the office admin and they had one of the few cracking summer days we have had for their marriage. The dress code at NZ events is fairly relaxed. This was the first Kiwi wedding for all of us except Ailsa. I can understand the attraction of shorts (although I did wear long trousers), but the most paradoxical clothing issue is that in the UK where no one needs to wear one, hats are a big deal at weddings, whereas in NZ where the UV rating makes hats an essential item, no one wears them to weddings. 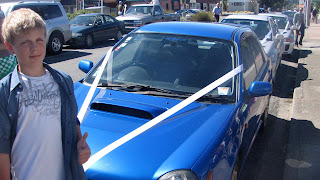 I like weddings where the emphasis is on the people and the promises and where people realise that you don't have to spend a fortune to have a great celebration. Jamie was particularly impressed with the hot hatch bridal car. 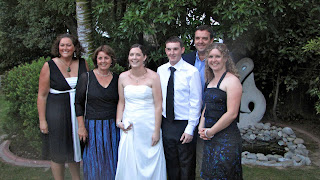 It is turning into a wedding fest in the office. Anna, our Personnel and Events Manager has recently married Alastair, James, Systems Manager and Wellington Staff Worker (currently at Regent College) has just become engaged to Jen. Elsewhere Sarah, Lincoln University Staffworker has got engaged to Dave. We are delighted for them all. 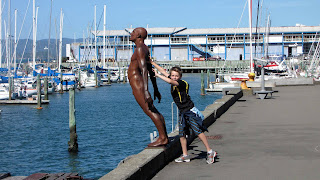 Monday sees the boys return to school, me back in the office and Ailsa catching up with her routine. Not all the statues at the waterfront are reflecting. Some of them need a wee push to get going. 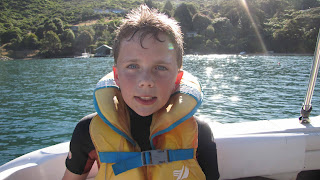 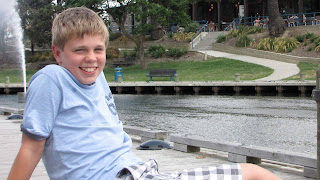 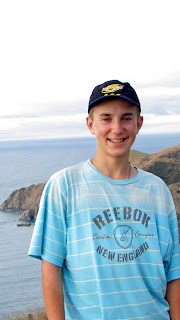 A few more pictures of growing boys from the holidays with our thanks and love to all who support and encourage us in different ways.
Posted by Nigel Pollock at 1:06 AM

gorgeous - both the examples of old and new creation. you look like an authentic kiwi family on holiday!

I am guessing you intend that as a compliment Paul!!!! Sorry to miss you on Thursday but hope we can catch up soon.

Great photos and update. The boys are getting so tall!

p.s. I think it must be Gollum.

Anonymous said...
This comment has been removed by a blog administrator.
12:19 AM

The restaurants list with thousands of restaurants reviewed by visitors. http://restaurants-us.com/ca/Bakersfield/Mc%20Donald%27s/93304/