Moustache you a question. 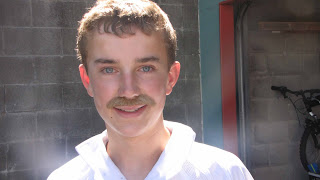 The annual Wellington 7s saw the boys donning moustaches and sporting gear. The number of shavers in the house is increasing but fortunately no one is yet sporting a 'tache on a regular basis! 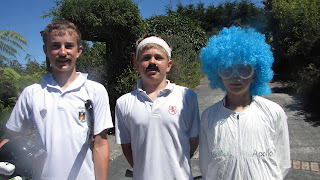 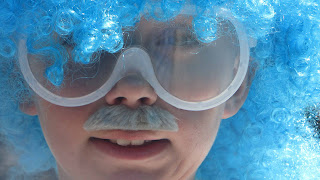 We don't have that many Wellington traditions but this has become one of the family annual events. I spent the weekend shivering on the sofa with a nasty bug. It is a fairly unusual event but when I am too ill to watch sport I am definitely ill. 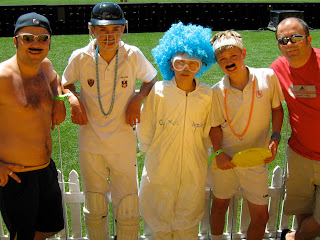 Ben and his brother Jonathan visiting from the UK were there to see Scotland fail to impress, as usual and NZ not manage to make a home final again. I think Jonathan thought he was back at my old school where we often played shirts against skins at Rugby and at 7s. Although in Scotland the worry was hypothermia rather than sun burn. 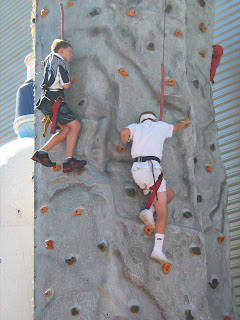 A new innovation this year was a mobile climbing wall. The boys always enjoy a wee scramble. The 7s usual coincides with the end of the summer holidays and the return to school. 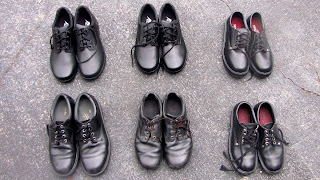 The annual purchase of new school shoes is a reminder of how much they all continue to grow. If our feet continued to grow at the same rate for the whole of our adult lives we would have feet the length of our shadows on a winters afternoon. Last years shoes with worn tread and scuffed toes testify to months and miles of school boy life. 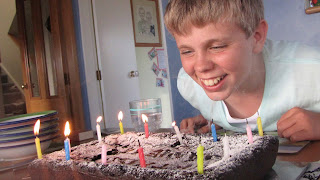 The birthday season started with Jamie turning 14. He continues to thrive at Wellington College and recently scored his highest ever cricket score when he was 48 not out having opened the batting. Jamie has started helping at Kids Alive and has started his Bronze Duke of Edinburgh. He also has a new piping teacher which seems to be working out well. 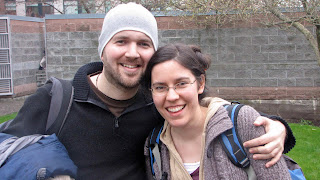 I visited Vancouver where James (real moustache apparently) has been studying. While there he met Jen from California and they are getting married on the 1st of May. They are a delightful couple and will be a great asset when they come back to New Zealand later in the year. At the moment we are discussing where they would be best placed and would all appreciate wisdom for this. 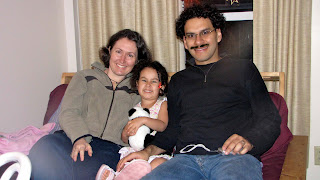 I was also able to spend time with Ruth and Josue (reality of moustache untested but looks plausible) who have also been studying at Regent. Regent has been a great experience for them and they will return to Ecuador with much more to contribute to student work there. They are also expecting a baby which Anna Gracia is especially delighted about. One of their key concerns is finding the right place to live in Quito. 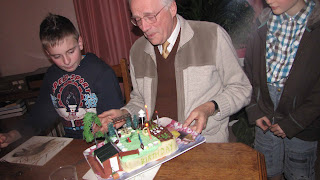 I was able to be at Grandpa's birthday party in Dunbar with the Elgin and Falkirk cousins. We miss being part of family occasions and gatherings. 2011 sees both sets of grandparents celebrating their golden weddings. We are not sure when next to all try and visit Scotland. We have been working on improving communication with UK supporters of the Pacific Partnership Trust. Our giving has held up pretty well in the recession but the collapse of sterling is hitting us hard. The exchange rate is currently by far the worst it has been since we have been in New Zealand. 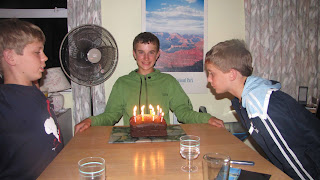 I had a bit of a nightmare journey home with delayed flights and missed connections which messed up my plans flying back. These kind of things don't actually happen to me as often as people imagine but they are always frustrating when they do. I did manage to make it back for Luke's 16th birthday. Luke is now in his second last year at College. He is enjoying singing in the chorale, running and looking forward to the new Hockey season. He is also in the chorus of the school musical "jesus Christ Superstar" which starts rehearsals this week. 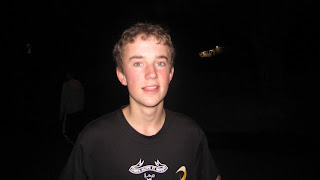 He did the Wellington College Runathon for World Vision for the third year in a row. This year they were raising funds for a village in Tanzania for water, health and education projects. It has become a huge event in the school calendar and it is great to see this emphasis on the developing world. 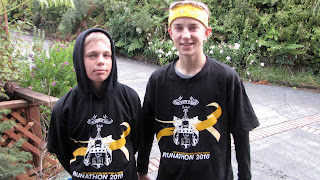 Jamie was running for the second year. The event runs for 40 hours and at least one person is running all the time. Jamie ran 81.6 km and Luke 85.6 km over the course of the 40 hours. Both were struggling to walk towards the end. At the moment it looks like they have raised about $500 each but are still hoping for a few more donations. 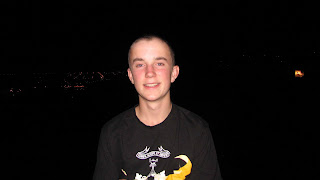 Luke had his head shaved for the cause for the second year. Which looked okay at the end but he had it done in stages and it was definitely not streamlined for some of the day. The day after he left for a geography field trip to do the Tongariro Crossing which is a fairly significant walk at the best of times! 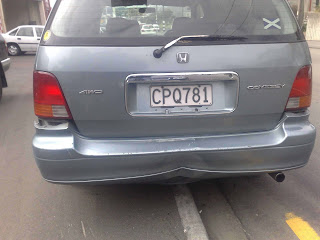 Ailsa was rear ended waiting at lights by a car which promptly did a U turn and sped away. They got the registration but it has been a long and frustrating process to get the car fixed and the insurance sorted. You are not required to have insurance of any kind in NZ, we have comprehensive cover but in this kind of situation the excess should be paid by the other party but if they are not covered it is complicated recovering the funds. These sorts of things take a moment to happen and weeks of time and energy to get sorted. She has also been getting her teaching qualifications assessed by the NZ Qualifications Authority, this too has been a long and slow process but is nearing completion now. 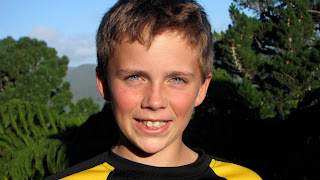 The birthday season finished with Craig turning 11. He is really enjoying St Marks and likes his new teacher, he has a good group of friends at school and church and is involved in a range of sporting and cultural activities. 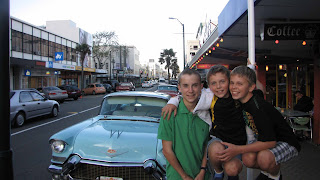 We went to Cadillac, a new American Style Diner in Lower Hutt for his birthday tea. My Mum and Dad were supposed to be here for his birthday but my Dad fell on the golf course and broke his leg so they have had to cancel their trip in the meantime. 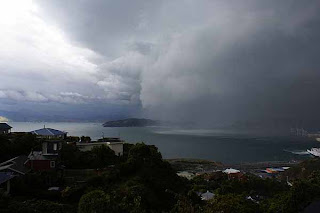 The other day a storm hit Wellington. It was described as a one in 100 year meteorological event. We could see the storm coming. It swept in a line over the harbour, the surface of the water churning in its bow and came up the valley like a wall. The wind hit first and then came the rain. The temperature in the living room dropped 12 degrees centigrade in less than 5 minutes. It was a reminder of the force of the wind and the impact of typhoons and cyclones in the Pacific. But it was also a picture of where we are at the moment. There have been huge encouragements this year, a good start in many universities, the launch of the Catalyst Web Book Store, positive international partnerships and good investment in emerging leaders. But at the same time it feels like we are weathering a storm. Economically, spiritually, relationally there is plenty wind and rain about. Storms here make you grateful for windows not blowing in and roofs not blowing off. In Jesus day the key architectural issue was if your foundations were sand or rock. Aside from the parables the disciples learned things in storms personally about God's protection, power and authority and about taking steps of faith beyond anything they had considered on dry land in the sunshine. 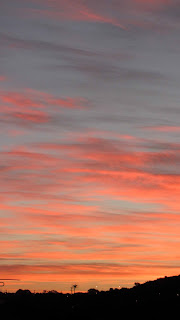 Stewart Goudie (yet another man with a moustache) sent me a message saying that he wanted to speak about our work, alongside his own story of being called into ministry, at the D'mains men's meal today. He asked if I had anything I would like him to say. How do you summarise 4 years in three sentences? Encourage them that we are making a difference in NZ, around the Pacific and beyond, slowly, in the grace of God we are seeing lives and situations changed. Thank them, we are enormously thankful for all who pray and give and invest in our work, the work of the Pacific Partnership Trust and the ministry of TSCF, we could not do anything without their partnership. Tell them that we are weathering a storm but we know that storms do not last forever and ask them to pray that our foundations would be strong and that we would remember Jesus presence with us. 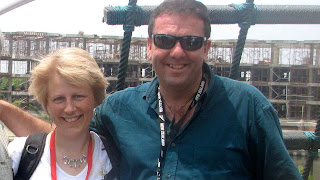 Ailsa and I had a great time at the IFES "Living Stones" conference for General Secretaries in Malaysia. The boys were hosted by three different families and we were away for 8 days. This was an extremely encouraging time but deserves an entire blog to itself. So having caught you up with family news that will be our next news update. We were especially thankful that reward flights were available on the days we wanted to travel which was a big help in making the trip possible.
Posted by Nigel Pollock at 2:14 AM

Great 'taches - do congratulate the boys!

Sounds like you've all been having loads of good adventures recently - I have to say your blog posts make it seem that life in Edinburgh moves slowly in comparison!