That was the term that was. 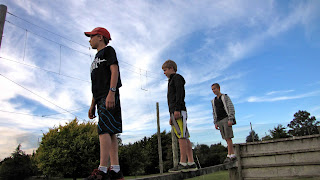 We are in the first few days of the mid winter holiday. We get two weeks at this time of year which is a welcome break. We are having a few days holiday but thought we would catch you up on what we have been up to this term. I have just come back from TSCF National Conference which was called "This is Jesus" but based on the picture below in my case could have been called "What not to wear"! 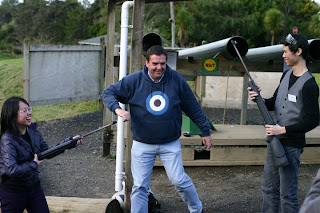 Wearing this hoodie at the TSCF National Conference almost proved too much of a temptation for some of the students. "This is Jesus" was a great event and the biggest student conference we have had in my time in NZ. It was particularly encouraging to see the quality of some of many of the students. We also had guests from the widest range of Pacific Islands. Tom and Yando were there from PNG, Atieca from Fiji, a small group from Vanuatu including one from Samoa and a couple from Australia. We are starting to see some genuine partnership develop in the region and we are starting to plan some more initiatives together. 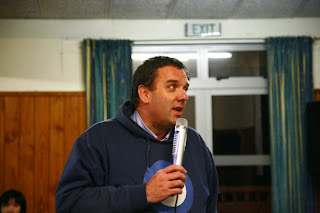 I was doing a series of 5 talks from John 3-8 and we also had Roger Carswell doing 3 sessions on practical mission and Mark Grace doing a session on the gospel story in the story of New Zealand. We had Kris and Jodie Bate performing before each talk and it was fantastic to see the arts being used well in a teaching context. This has huge potential for the future and it was good to interact with them and with others who have a passion to see good content and excellence in creativity combined. My personal highlight was listening to Chris Clarke, who is the CEO of World Vision in NZ talking of the ups and downs of a career in health management and lessons in life and leadership in 25 years since graduating. It was a great reminder that we are about changing students for life as well as reaching students for Christ. We had representatives from about ten mission agencies present. One commented on how it was the most included they had felt in an event and that it had been a great boost for them to hear the teaching and see the enthusiasm of the students. Another commented later "Hey wanted to thank you so much for your teaching at TSCF conference. Not only was it really great for me personally, it was so cool to have mission as such a focus in everything you shared. Well done, nice work :)". I should point out that the picture above is of Karaoke rather than preaching and there are times when you wish that the rifles had been loaded earlier in the day. 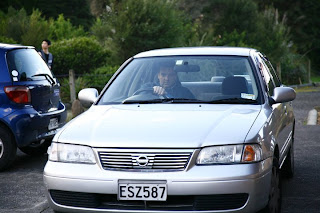 The conference was in Auckland and I always get confused there. Driving around Auckland (in a hire car) always makes me feel like I am in America. It is a reminder of the different characters of the cities in New Zealand and of the diversity of culture. They say only 38% of Aucklanders were born in NZ and the diversity of students at conference certainly reflects that. It was good to see greater use of Maori in the conference at the Powhiri welcome and also in the praise but identity continues to be a challenge. It struck me in conversation on numerous occasions that while we understand in principle that "Pakeha" (the Maori word for non Maori) includes Asian as well as European immigrants, in practice many European descended New Zealanders use "Kiwi" in a shorthand way that does not consciously include Asian descended new Zealanders (including those born here). These are not easy issues and we are committed to working through them, despite their difficulty. 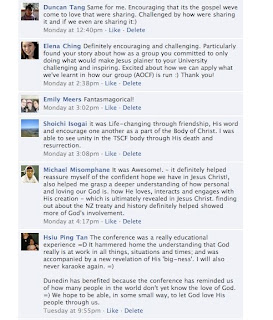 One of the things that I have been trying to do is to encourage students to say more about their response through web sites and social networks. This is both to help them and to give others who support a better insight. 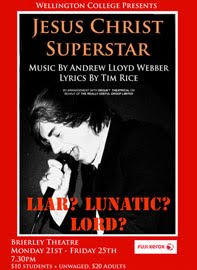 Luke and Jamie were both in the College Musical: "Jesus Christ Superstar". Luke was a disciple and Jamie was a leper. It was a very well done production which sold out for all six nights, a few friends managed along and all enjoyed it. There are a couple of pictures of them in costume on order which I will put up when they come to hand. In other cultural news Luke continues to enjoy singing in the Chorale. They won the prize for best pacifica piece at the Wellington Big Sing but were not selected for the Nationals this year which was a disappointment to them. Craig has one of the lead parts in "The Tempest" next term as Caliban's conscious and Jamie enjoyed the musical so much that he decided to audition for the Junior Drama and has one of the lead parts in the play next term as Zody, so they both have lots of lines to learn. 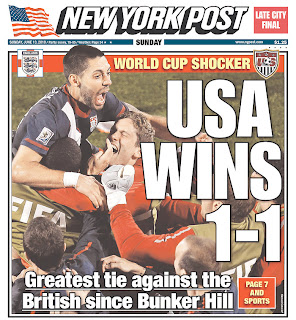 Sport continues to play a big part in our house and we have been watching World Cup games at all sorts of strange times. 11.30 pm, 2.30 am and 6.30 am have all been kick of times. We watched all three of NZ games and can relate to the US headline above. Sometimes a draw really does feel like a win! If Spain win the final New Zealand will do as Scotland did in 1974 and be the only unbeaten team. We have also been succesful in our ballot for tickets for the Rugby World Cup and will manage to see all the pool games in Wellington. 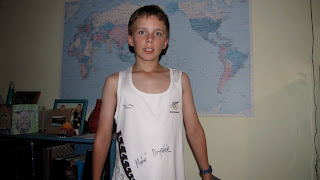 Craig managed to secure this signed Mahe Drysdale singlet from the Beijing games at a blind auction at school. He was very excited with his purchase and decided to try it on before putting it back in its display frame. It is interesting how we now have heroes who are Scottish and heroes who are Kiwi. It makes you realise how few global heroes and icons there are! 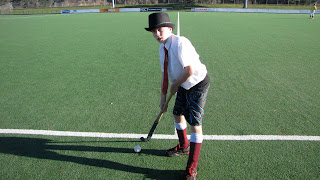 The Hutt Hockey club had it's centenary which included some games in fancy dress. Given that Craig as a goalkeeper usually plays in fancy dress he decided to play outfield in historical garb. His Hutt team is having a good season and won the grading round of the competition. He has been selected for the Wellington Under 13 Development Team and is delighted about that. It is the first time in 4 years that I will have had one of the boys in the Rep Team I am coaching so that will simplify things a little for the family. He stopped a shot with his chin at training last week (not the recommended technique) which shattered his helmet. He now has a new orange one but we were grateful that he was wearing good protective gear. One of the older styled half helmets would have seen a serious injury. 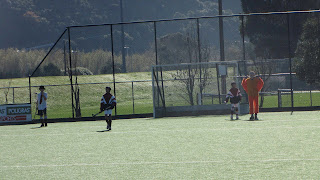 Luke is helping coach Craig's team for his Duke of Edinburgh Silver service. He went to the Hutt Centenary wearing a chicken suit that has survived from University and won a spot prize of a training top. His own hockey has improved a lot and he is playing in the 2nd XI. Wellington College 2nds play in the second division against 7 college first teams so it is a pretty good standard. 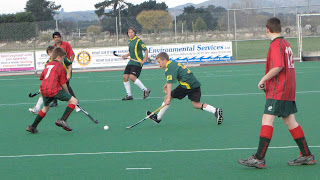 Jamie is playing for the College Under 15A team again this year and is the top scorer. That team is effectively our third team but we play in the 3rd Division against 4 colleges first teams and 3 second teams. It is pretty astonishing that in Wellington secondary school sport there are 7 divisions of boys hockey teams each with 8 teams playing every week. 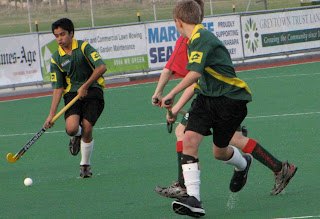 Jamie just missed out on the Wellington Under 15 rep team but because we live in the Hutt he was able to also trial for the Hutt Valley Under 15 Reps and was selected for them. This has helped his fitness and given him an opportunity to play a few more games and score a few more goals including a hat trick in the Wairarapa. 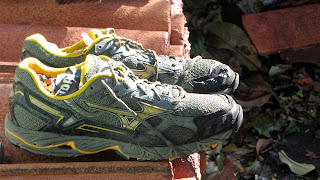 Luke and Jamie both competed in the Wellington Regional Cross Country and Luke was selected to run in the NZ National Championships. He ran one of his best ever races and finished just outside the top 100! He finished 6th of the schools runners so "counted" for the team and beat a few boys for the first time. He has been training at 7 am two days a week which means leaving the house at 6.30. My own running has been a bit hampered through injuring something in my foot that is hard to pronounce. It has been frustrating not to be able to join in with training like last year but it now seems to be recovered. 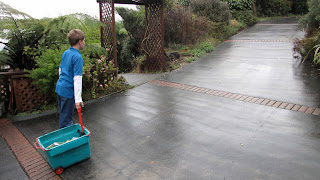 We have also been in the season of Science fair projects. Craig decided to try to design an improved recycling box and did well enough in the school Science Fair to get through to the Regional Fair next term. He is really enjoying school and throws himself into everything with great enthusiasm. 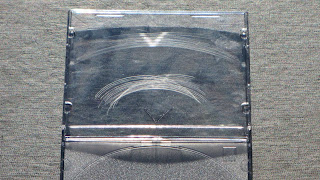 Jamie decided to make home made holograms which was more successful than it sounded it might be. He is also doing really well and is turning into a talented artist. He has started on his bronze Duke of Edinburgh and recently completed the first practice expedition. 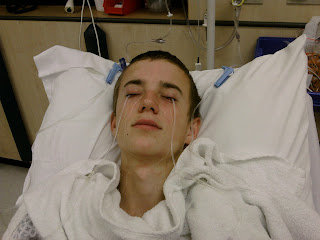 Luke did not have to do a Science fair project but wound up doing his own investigation into how to flush chemicals out of the eye! He was walking past another group in the lab (having finished his own experiment) when one boy ignored the instructions and put took much acidic solution into his experiment and it sprayed everywhere. Luke and another 2 boys went to hospital and two of them had the irrigation treatment that makes him look like an alien from Dr Who. We were all thankful that no lasting damage was done. Luke also continues to enjoy school and all the extra curricular activities. This week he has completed a three day barista training course at Mojo Coffee. He had to make 7 drinks (latte, cappuccino, mochacinno, filter coffee, tea, hot chocolate, banana smoothie) in under 8 minutes for a distinction and do a written test (for which he got 20/20) Now he just needs to find a friendly cafe who would like a reliable but extremely busy helper, occasionally! It is hard to believe he only has 18 months of school left. 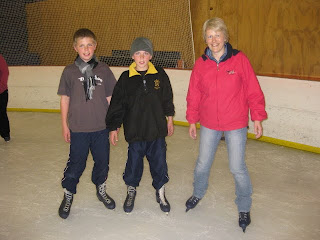 This was the most recent picture I had to hand of Ailsa. She continues to be involved at church and to enthusiastically support us in all kinds of weather. With her teaching qualification now ratified and her being registered in NZ she has been looking for some relief teaching and hopefully a door will open for that next term. Overall the work this year has felt harder in many ways than last year but although we have felt on thin ice at times we have not fallen through. We have a lot to be thankful for and are glad of the opportunity to have a few days break. I still find the rhythm of the year hard to adjust to. This should be long summer evenings, golf with Stephen and the possibility of SU camps for the boys. We value your friendship and support expressed in many different ways and hope that if you ARE in the northern hemisphere you are having a good summer.
Posted by Nigel Pollock at 11:25 PM

Thanks for a great update

Just checking in and glad to have some news. Love the photos.

It was a great conference! Really encouraging to meet up again with others in TSCF and to be reminded to focus on Christ and the cross, the core of the Gospel. :D

Nice to hear from you Lorraine - love to you all.